A Winter’s Tale of Fox and Hound 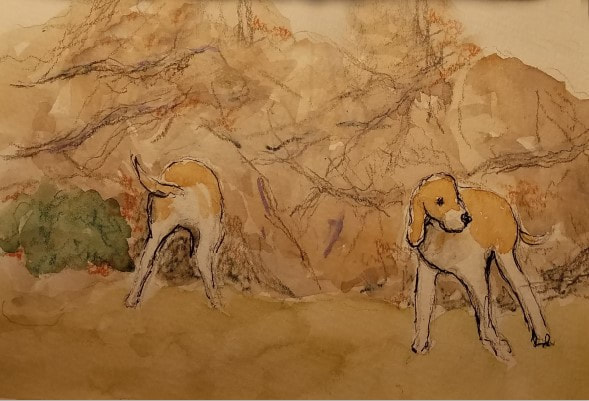 ​Whimsy followed Charles’ scent full bore through the field of Angus and with a flying leap reached out for the white tip of CM’s tail as the fox disappeared.
She was too late.
Charles was smaller and more agile, and Whimsy was no match for him. He drew his tail around his legs, pressing deeper into the stick pile to evade his pursuers, thankful he hadn’t headed home early, accidentally leading the hounds back to his den. He knew Rosemary would have been very upset with him for bringing the pack to their home.
She’d be concerned he was late, but she’d have been mad if there was a pack of hounds on her doorstep.
The huntsman blew his brass horn, praising the hounds for a job well done. Flasks came out and the riders toasted Charles Mosby.
By now it was snowing steadily, and they rode away, headed to their own warm homes.
Charles crept out of the stick pile and started to trot back home, rather proud of his antics. Little did he know, he had one quiet pursuer still in pursuit. Dinwiddie had broken away from the pack and was trailing him stealthily.
The snow was coming down hard now, blowing sideways, but that did not deter old Dinwiddie. He wasn’t ready to go back to kennel. Storm be damned! He was finishing his ninth season, and he wanted to hunt CM right back to his den.
Charles slipped into his dark, warm home to find a very cross Rosemary. She scolded him. “You’re really pushing it coming in this late,” she hissed.
Charles ignored it. He put on his slippers and smoking jacket, and grabbed his corncob pipe off the shelf.
Charles started to tell Rosemary of the exciting run, the snow, the cold, the cheers and toasts to his wile and whimsy when all of the sudden there came from the door a familiar bellowing voice. “I know you’re in there! Let me in Let me in!”
Rosemary sat straight up in her chair. “Is that you Dinwiddie,” she screeched.
“Indeed it is,” Dinwiddie barked in reply. “It’s snowing like the Dickens and I can’t get back to the kennels. For the love of animals, let me in!”
Now, there’s a little known camaraderie among the woodland animals that humans have long lost. They communicate, and they communicate directly. And an even deeper secret pervades the Free State region. A special, secret password between the Free State hounds and the Free State foxes signifies a “truce” of sorts. It it taught to every kit and every pup during cubbing season.
“What’s the password, Dinwiddie,” Rosemary asked quietly, ready to tunnel deeper if it was a nasty trick.
Dinwiddie thought for a moment, willing up the phrase he’d learned so long ago. “The quick brown fox jumps over the lazy log,” he said with a pant, and, with that, he let himself into the small den.
That night, Dinwiddie, Charles and Rosemary shared the glorious feast of suet and mouse casserole.
“Tastes a lot like chicken”, said Dinwiddie, jowls drooping a bit after his fifth glass of port. They swapped stories of the grand old days and reminisced about their favorite runs. They agreed that the biggest thing foxes and hounds share is a deep love of open spaces to run and play and raise their families.
After a toast to Rosemary’s soon-to-arrive cubs, they curled up for a long winter’s nap.
The next morning Dinwiddie dug his way out of the den and made his way home. Huntsman Washburn took a long look at Dinwiddie as he walked up. “Where’ve you been boy?” he admonished. “I’ve been blowing my horn for you all night.”
Dinwiddie looked up at him with those puppy-dog eyes and put his paw on his leg. He wished his huntsman could understand.
“You wouldn’t believe me if I could tell you.”

The end
Powered by